Capt Martin Lloyd Sanders received his Bachelor of Science degree from the University of California, Davis in 1990. He continued his studies at the Department of Immunology and Infectious Diseases at Johns Hopkins University School of Hygiene and Public Health, obtaining his PhD in 1997. 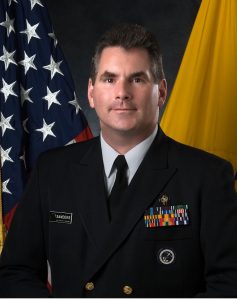 Previously, Capt Martin Lloyd Sanders served as the Director of Safety, Emergency Management, and Environmental Compliance for Federal Occupational Health (FOH), Program Support Center (PSC), and Office of the Assistant Secretary for Administration (ASA). He was also the Chief Scientist for the United States Public Health Service (USPHS) and the acting Chief of Safety for the Department of Health and Human Services (HHS). In addition to these roles, Capt Sanders also previously served as Chief within the National Institutes of Health.

As Director of Safety, Emergency Management, and Environmental Compliance, Capt Martin Lloyd Sanders oversaw department-wide safety, environmental compliance, and emergency response policy. He also supported strategic business growth and management initiatives for the PSC. Meanwhile, at USPHS, he supported the Office of the Surgeon General in developing and implementing strategic health policies and leading the USPHS Commissioned Corps in recruitment, readiness, retention, mentoring, and many other strategic policy areas. The role of Chief Scientist is appointed by the Surgeon General of the United States. Capt Martin Lloyd Sanders is likewise responsible for the HHS regulatory oversight related to the Occupational Safety and Health Administration (OSHA).

A decorated officer in the US Army and USPHS, Capt Sanders was named Derek Dunn Memorial Senior Scientist Officer of the Year in 2007. This award is given by the Commissioned Corps of the USPHS to honor officers for their exemplary achievements and commitment to the USPHS. At the time of the award, Capt Sanders served as Deputy Director of the Centers for Disease Control and Prevention’s Health and Safety Office.

Disclaimer: This site was prepared by Martin L. Sanders in his personal capacity. The opinions expressed are the author’s own and do not reflect the views of the USPHS, the Department of Health and Human Services, or the United States government.